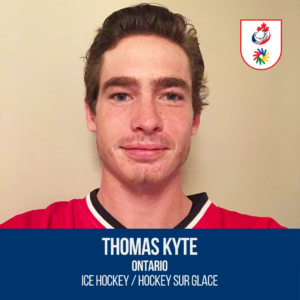 His sports debuts:
His parents got him into hockey while they were living in Evergreen Colorado. He was 3 or 4 years old and very luck enough to have parents that introduced him to the sport very early.

His goal for the 2019 Winter Deaflympics:
His goal is to bring the gold medal back home.

His biggest pride in his athletic career:
He is very proud to representing his country.

More about Thomas Kyte:
He also does long distance running.