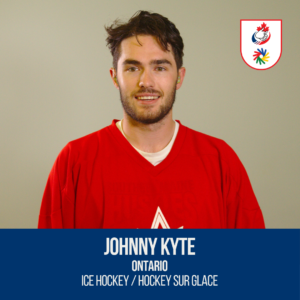 His sports debut:
Johnny started at a very young age trying all sports. He liked hockey the best and flew with it. It was in 1999 that he started out on the ice and learned how to play hockey with his father in Colorado, USA. It wasn’t without challenges and he kept coming back to the rink so he could keep improving.

His biggest accomplishment in his athletic career:
Being able to knock down any barriers and goals that he has. It may take time, but he will always continue to chip away at it until he reaches his end game.

More about Johnny Kyte:
When he’s not training or competing on ice, he enjoys hanging out with friends and casting off for adventure.