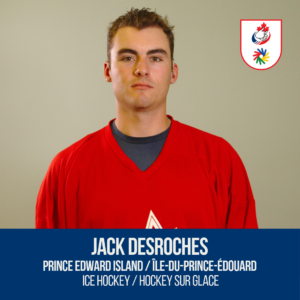 His Sports Debut:
He started to skate when he was around 3 years old.

His First International Competition:
His first international competition was in 2017 in Buffalo, USA. He was 17 years old at the time. It was an unbelievable experience that he enjoyed so much.

His Goal for the 2019 Winter Deaflympics:
To bring gold back to Canada.

His Biggest Accomplishment in His Athletic Career:
Representing Canada

More about Jack Desroches:
He also enjoys boating and hanging out with friends back home.

His motto:
Play high intensity games with friends and get better every day.