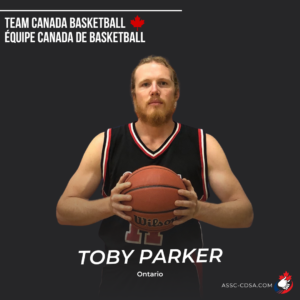 Toby, age 27, from Puslinch, Ontario, played basketball from 2010 to 2012 in high school at the E.C. Drury School for the Deaf. When he was younger, he also played softball, a sport in which he was the MVP pitcher and won a championship before even entering high school. He played mostly chess during his childhood and lost in 3rd place in 7th grade. Currently, he is involved in rock climbing and sailing clubs.

Toby looks up to Klay Thompson, a player who has made a comeback by winning a championship in the NBA. They have similar injuries.

An interesting fact about Toby: he is a farmer.