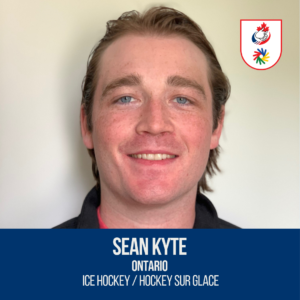 His sports debut:
At 5 years old, Sean started playing hockey at an outdoor community rink in Pembroke and took part in the Pembroke Minor Hockey Association. His father, Murray Kyte, grew up playing hockey with his brothers, a passion he later passed on to his sons, Conor, Joe, Patty, and Sean himself who are all fervent hockey players.

For Sean, it was a phenomenal experience representing Canada. He loved every aspect of the tournament, from his teammates to the hockey intensity, and perks that come along with that. Meeting new athletes and friends on a daily basis was something he loved being a part of. Winning the silver medal was a special moment for him. He is now looking forward to winning Gold in Italy.

His goal for the 2019 Winter Deaflympics:
His goal is to help his team do whatever they can to win the gold medal. Ensuring his leadership both on and off the ice helps in pursuing their goal.

His biggest accomplishment in his athletic career:
For Sean, being able to wear the Canada colours is an amazing feeling. He truly takes pride in representing his country both on and off the ice.

More about Sean Kyte:
While his heart belongs to hockey, he also enjoys golf and playing guitar.