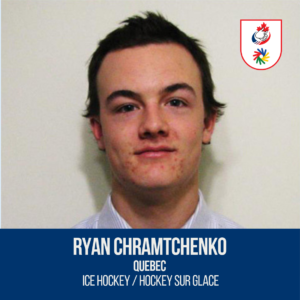 His Sports debut:
He began to develop his passion for hockey by starting in the basement of his parents’ home at the age of four.

His First International Competition:
His first international competition was incredible for him during the World Deaf  Ice Hockey Championships in Finland in 2013.

His Biggest Accomplishment in His Athletic Career:
His biggest pride in his career is to be able to wear the Maple Leaf and play for the country.

His Motto:
One shift at a time.