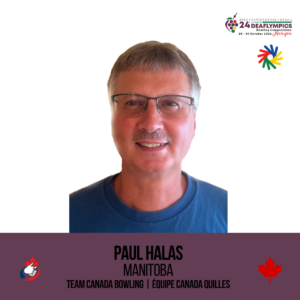 Paul, age 58, from Winnipeg, is an avid sportsman. He recently participated in the 2022 Canada Deaf Games in Laval, Quebec for golf, pickleball and bowling.

This is not his first international competition. He has participated in 6 Deaflympics, 3 World Championships and 2 Friendly Games. He has also competed in the Pan American Deaf Games, where he won 4 medals.

For his 7th Deaflympics, Paul hopes to medal. He’s aiming to bowl consistently and thereby qualify for the Masters.

His idol is Walter Ray Williams, a professional bowler on the Pro Bowlers Tour.

An interesting fact about Paul, he works as a letter carrier with Canada Post!