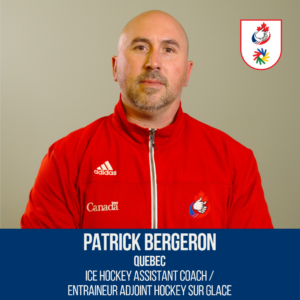 His Sports Debut:
He started playing hockey in the Montreal-Nord arena with his dad when he was 3 years old.

His First International Competition:
His first international competition with Deaf was the 1st World Deaf Ice Hockey Championship in Winnipeg in 2008 as Assistant Coach. It was a great experience for him, despite losing gold.

His Goal for the 2019 Winter Deaflympics:
Gold!

More About Patrick Bergeron:
When he is not on the ice, he loves camping.

His Motto:
No pain, no gain!