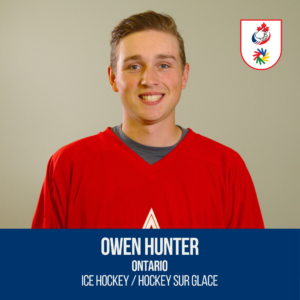 His Sports Debut:
He begins by watched Toronto Maple Leafs in TV and started playing in Timbits Hockey due to some aggressiveness at 7 years old. Hockey has been truly beneficial to his emotional management.

His First International Competition:
His first international competition was the 2015 Winter Deaflympics in Russia. This experience was surreal, he will never forget.

His Biggest Accomplishment in His Athletic Career:
His biggest pride in his hockey career is to win Silver medal in Russia! He never has been so proud to represent his country.

His Motto:
Only think about one thing: bring home the gold!