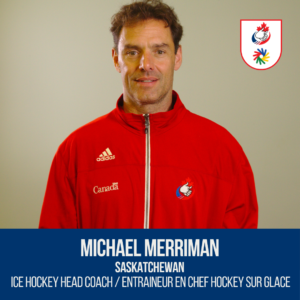 His First International Competition:
He started back in 1995 at the Deaflympics as a player in Finland when he was 25 years old. It was an awesome experience and was honoured to be a part of this organisation.

His Goal for the 2019 Winter Deaflympics:
His goal for the upcoming Deaflympics is to lead the players and staff to a positive experience of the games as much as he did as a player.

His Biggest Accomplishment in His Sports Career:
First as a player winning back to back gold medals.  Now as a coach to give back to the organization.

More About Michael Merriman:
He loves spending time with his family.

His motto:
Struggle and emerge.