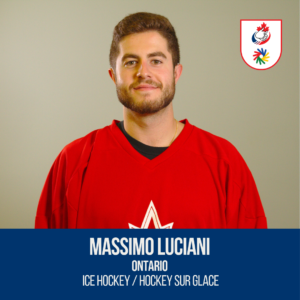 His sports debut:
He learned to skate before he learned to walk at 2 years old when his father handed him a hockey stick. He immediately fell in love with hockey. He started playing in the driveway and gradually grew into bigger leagues.

His biggest accomplishment in his athletic career:
Every time that he won with his team.

More about Massimo Luciani:
When he’s not playing hockey, he also enjoys cooking.

His motto:
If you’re not first, you’re last.