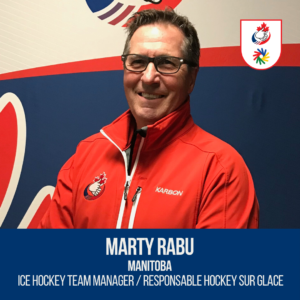 His Sports Debut:
He started playing hockey in Saskatoon, Saskatchewan at the Saskatchewan School for the Deaf when he was 6 years old.

His First International Competition:
His first international competition was in Russia in April 1989. Only 3 teams participated in this friendly world tournament. Team Canada won silver. It was an awesome environment over there and he played in front of lots of Russian Deaf fans.

His Biggest Accomplishment in His Sports Career:
His biggest pride is being a Canadian, winning 2 golds while being an assistant coach and general manager.

More about Marty Rabu:
His favorite hobby is doing crosswords and spending time with his family at the lake house.

His motto:
Hockey is his passion and he likes to see his players doing their best as well as succeeding at winning the Gold. They’ve been dreaming of it from since the 2003 Deaflympics.