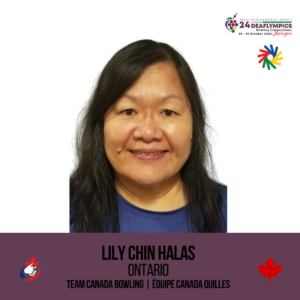 Lily, age 59, from Mississauga, plays in 10-pin bowling leagues. She participated in the 2022 Canada Deaf Games in Laval and won 3 silver medals.

For the upcoming Deaflympics 2022, Lily is hoping to have fun and finish in the top 16 overall.

She has a lot of admiration for Judy Buehow from Australia, who was the oldest Deaf bowler at the Deaflympics in Samsun, Turkey. She was 80 years old in 2017 and will be competing in the next Deaflympics in Kuala Lumpur, Malaysia at 85 years old. It will be an honor for Lily to bowl alongside Buehow, as she inspires her to continue bowling no matter her age.

A few interesting facts about Lily: she loves cats, doing all kinds of needle crafts, and putting colored nail stripes on her nails and toenails. Her daughter, Orina, is also a bowler!