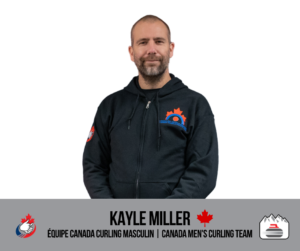 His goal for the 2022 World Curling Championship is:
To get the gold!

His success in curling is due to:
When Clifford Beaulieu passed away and they asked him to join their team, he took the time to reflect and agreed because he supports their team.

More about Kayle:
He grew up in Regina (Saskatchewan) and moved to Winnipeg in 2009.