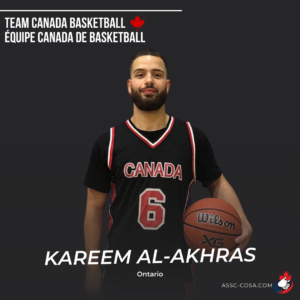 Kareem is 25 years old and from Toronto. He coaches in the CBA and attending at Seneca College in Toronto and currently plays in a few basketball leagues in his area in the fall.

For the 2022 Pan American Deaf Games, Kareem hopes to win gold and lead the team well as a point guard. This win will allow the national team to play at a high level, advancing to the next Deaflympics.

Kareem admires Stephen Curry, a player who always comes back stronger and uses his game to tune out the critics. Curry has gone from being an underdog to being the greatest shooter of all time.

An interesting fact about Kareem: He is currently earning his second degree at Seneca College.