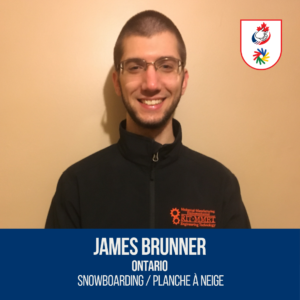 His sports debut:
He wanted to try snowboarding after playing a fun N64 video game ‘1080’. After receiving a cheap snowboard as a gift at 13 years old, he started learning at Glen Eden in Milton, Ont. He went straight and very fast on that board. His passion for snowboard racing started recently.

His goal for the 2019 Winter Deaflympics:
Do his best to establish a milestone that will inspire Deaf communities in striving to reach their goals.

His biggest accomplishment in his athletic career:
Seeing his snowboarding skills develop in every race.

More about James Brunner:
Besides snowboarding – longboard, hike and exercise.

His motto:
Just go with the flow.