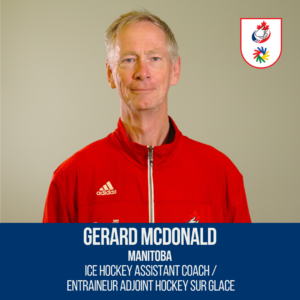 His sports debut:
At 48 years old, he started coaching Team Western in Calgary in 2006, thanks to Hubert Demers and Marty Rabu, who got him involved.

More about Gerard McDonald:
He only loves hockey!

His motto:
Whatever the time or place, just be the best you can. That is all we can ask.