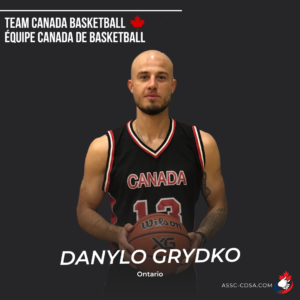 Danylo, age 29, from Toronto, has been a member of Team Canada for almost 12 years. He started playing basketball when he arrived in Canada at the age of 8. During his childhood, he was always trying new activities. He grew up playing soccer but wanted to explore other sports, which is how he fell in love with basketball.

At the 2016 Pan American Games, he was selected as the best offensive player. For the upcoming 2022 Pan American Games for the Deaf, he is aiming to bring home a chocolate medal home for Canada! But really, he’s fighting for a medal that qualifies him for the 2025 Deaflympics.

Danylo’s favourite basketball player is Kobe Bryant! He played in the NBA with the Los Angeles Lakers and is the only player in NBA history to have two numbers displayed on the ceiling of the same franchise.

An interesting fact about Danylo: He is a fighter, no matter what! Even if he gets hurt, he always keeps fighting to achieve his goals. He has the same mentality as his favourite player, Kobe!