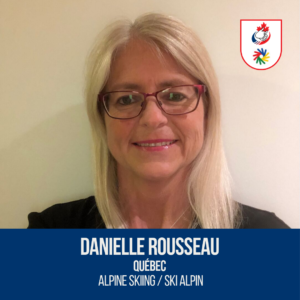 Her Sports Debut:
Back in 1969, she started alpine skiing in Sillery, Quebec, on a snow mound near the parking lot of her parent’s home. She was barely about three years old. At the time, skis were made of wood and the hard-plastic bindings covered the ankles.

Her First International Competition:
The 1991 Winter Deaflympics in Banff, Alberta, was her first international experience. Although she won a bronze medal in slalom, it was not her best personal performance.

Her Goal for the 2019 Winter Deaflympics:
Her goal is to get good results first and foremost. For Danielle, the satisfaction of getting results at the level of her efforts is worth more than a medal.

Her Biggest Accomplishment in Her Athletic Career:
Her greatest accomplishment is to represent Team Canada at the Winter Deaflympics for the 7th time in her career.

More about Danielle Rousseau:
She is one of the Canadian athletes with the most participation in the Winter Deaflympics and has also won a gold medal in Women’s Volleyball at the 2007 Pan American Games in Venezuela. In her spare time, she enjoys seasonal sports activities such as cycling and snowshoeing.

Her motto:
“Do not limit your challenges. Challenge your limits.”