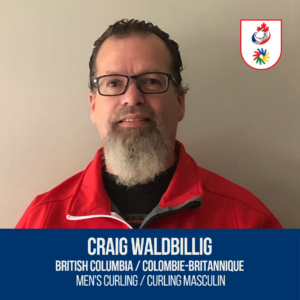 His Sports Debut:
Waldbillig started playing ping pong in 1977 in Saskatchewan and began curling in high school in 1978.

His First International Competition:
This 2019 Winter Deaflympics will be his first international competition.

His Goal for the 2019 Winter Deaflympics:
His goal is to win gold!

His Biggest Accomplishment in His Athletic Career:
His biggest pride is to represent Canada with his team.

More about Craig Waldbillig :
Curling is his life, he always plays curling.

His motto:
Be positive and be patient.