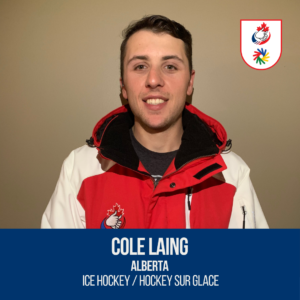 His sports debut:
Back in Blackfalds, AB, Laing started handling ice hockey sticks and skating in 2001, at the young age of 6 years old. He  started by honing his skills with power skating along with his mother and started playing hockey from watching hockey games on television.

His goal for the 2019 Winter Deaflympics:
For this year, he aims to win the gold medal while having fun and building memories.

His biggest accomplishment in his athletic career:
Showing leadership.

More about Cole Laing:
Outside the ice rink, he enjoys gaming and doing group activities.