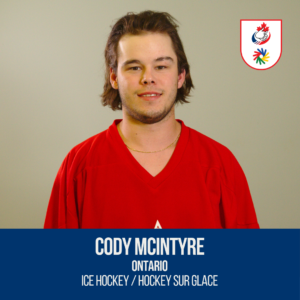 His Sports Debut:
His parents taught him how to skate when he was 3 years old. Then, he playing novice minor hockey for the BCH Ice Dogs.

His First International Competition:
His first international competition was the 2013 World Deaf Ice Hockey Championship in Vantaa, Finland. It was a great experience to play in an international tournament and represent his country!

His Goal for the 2019 Winter Deaflympics:
His goal is to finally win the gold medal!

His Biggest Accomplishment in His Athletic Career:
His biggest pride is being a member of the Deaf National Hockey Team and working towards bringing home the gold medal.

More about Jesse McIntyre:
He only loves playing hockey!

His motto:
Journey to the top!