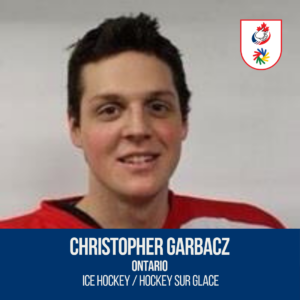 His Sports Debuts:
He started skating about 3 or 4 years old in Minor hockey and church leagues. Also, he learned to skate with the Can Skate program. His family loves skating and playing hockey.

His First International Competition:
His first international competition was the 2007 Winter Deaflympics in Utah, USA. It was a great experience for him. He was so excited and very nervous but he learned so much there!

His Biggest Accomplishment in His Athletic Career:
Being a member of a Canadian team and winning Golden Horseshoe championship in Junior B league.

More about Christopher Garbacz:
When he’s not on the ice, Garbacz can’t stay in place. He loves to play golf, volleyball, football, watch movies and all sports on TV, as well as go out for outdoors activities.

His motto:
Give it your all.

In the News:
TBC