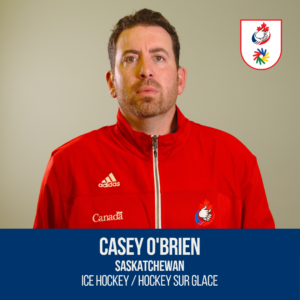 His First International Competition:
His first international competition was the 1999 Winter Deaflympics in Davos, Switzerland. It was a memory of a lifetime and he still think about it daily! Canada Team won gold and they were in one of the most scenic places and one of the greatest rinks in the world. This was the same rink that hosts the famous Annual Spengler Cup.

His Goal for the 2019 Winter Deaflympics:
For this Deaflympics, his goal is representing Canada to the best of his ability and develop lifelong friendships.

His Biggest Accomplishment in His Athletic Career:
His biggest pride is being successful in multi sports and having won gold in two Deaflympics and 2 silvers for hockey and a gold and silver in two World Deaf Golf Championships. Then, as a coach, winning multiple junior league championships.

More about Casey O’Brien:
When he does not play hockey or coach, he plays golf and enjoys reading in his spare time.

His motto:
There is no tomorrow and make it a great day.