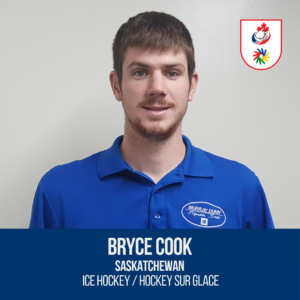 His sports debut:
Since Bryce’s father was a hockey player and his mother was a figure skating coach, it was a natural fit for him at a young age. At 3 or 4 years old, he was actually skating on the rink more than he walked in his own home.

His first International experience was the 2013 World Deaf Ice Hockey Championship in Vantaa, Finland. To Bryce, it was a unique experience to see the different cultures as well as the different styles of hockey playing against each other.

His goal for the 2019 Winter Deaflympics:

For the 2019 Winter Deaflympics, he aims to bring back Gold to Canada.

His biggest accomplishment in his athletic career:

One of his biggest accomplishments is being able to pursue sport at a high, competitive level with athletes that face common challenges with life.

When he’s not skating on his rink or walking in his own home, he enjoys racing dirt bikes.

His motto:
Failure to prepare is preparing to fail.

In the news:
TBC