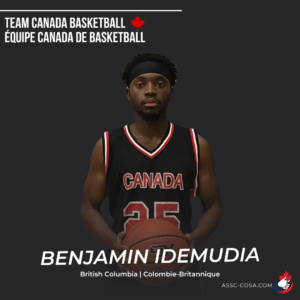 From Surrey, British Columbia, Benjamin is 25 years old and has been playing basketball for several years.

Benjamin’s been a player on the national team since the age of 16, so this isn’t his first time competing internationally. His team won 4th place in 2016 but unfortunately failed to qualify for the Deaflympics. The Deaf Pan American Games in November will be his second time competing at this high level.

He believes that the national team is of a high caliber. It’s particularly strong this year due to its new coach. He’s aiming to finish in the top 3, and is confident they will qualify for the 2025 Deaflympics in Japan. One of his goals is to stay active and in shape. He runs every day, does home workouts and trains with one of the best athletic trainers in Western Canada.

Benjamin has idolized Michael Jordan since his childhood.

An interesting fact about Benjamin: If he were to die tomorrow, he would want the work he has done to advocate for the deaf community, especially in the areas of sports and youth to be recognized.